The excitement and bustle of the maternity ward continued into early July as my last two cria (alpaca babies) arrived. They were boys, and I’ve named them Indra and Ifan.
Indra is named after the Hindu god of the sky and rain, which I thought was very appropriate for our British weather. His fleece is a lovely shade of grey which is also quite fitting for a rain god!

All five crias – three boys and two girls are growing fast, and their mothers are doing well too. The youngsters have formed a lovely group and it’s great to see them run and play together. They are most active at dusk, when they can be found having races.

Wizard and Derby, two of my grown-up boys, were again in the limelight last month when they were star attractions at a garden party in aid of Cancer Research. It took place at Essex Lodge, All Stretton.

It was a beautiful hot summer afternoon, with a quintessentially English, garden fete atmosphere. Visitors enjoyed cream teas, tombola, a raffle and a plant stall too, although the alpacas were definitely the stars of the show.
We set up a competition to amuse and bemuse members of the public. Participants had to guess the date of birth of both Wizard and Derby, but there was a twist because although they are father and son, they have the same birthday! It’s strange but true. It was a was a very pleasant afternoon and we raised £1800 which was an amazing result.

Just lately I’ve been busy sorting out my fleeces after the shearing which took place in June.
I have Huacaya alpacas (the ones that look a bit like teddy bears) and I send my fleeces off to a mini-mill on the Scottish borders, where they are processed individually and returned as yarn to sell in the Coco Alpacas shop.

Just in case you haven’t heard about the benefits of Alpaca fibre, you might like to know that it contains no lanolin, the greasy  substance which abounds in sheep’s wool and causes skin allergies or sensitivities in some people. That’s why alpaca wool is so wearable and well tolerated by almost everyone.  It also is a natural antibacterial fibre which repels odours so with the alpaca socks you can wear them for many days without them smelling and needing a wash!

I hope you are all enjoying this lovely weather we are having – the alpacas certainly are as they are spending a lot of time sun bathing getting their fill of Vitamin D! 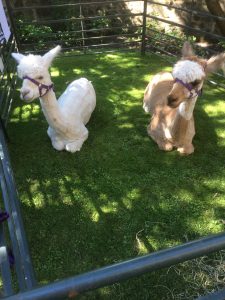 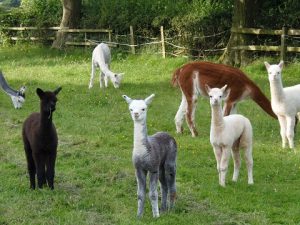