June was a joyful month as three of my girls produced beautiful crias- but this year we had the unexpected drama of a difficult birth to contend with.

The first of my girls to deliver was first-time mother Florence, who had a beautiful brown boy on June 10th who we’ve called Isaac. No problems there, Florence did really well and is a natural mum.

Then five days later, Selke produced a bouncing baby girl, Isabel,  a very large white cria with a cute pink nose. We called this baby Isobel and she is very strong and healthy.

The third birth, however, proved tricky.

Coco, one of my favourite girls, was having such a struggle that I had to call the vet in, but thankfully, with a little help she produced a little black baby girl called India. Mother and daughter are now doing fine! The baby quickly gained strength and is now running and playing with the other new arrivals.

It’s quite unusual for alpacas to have problems giving birth. They are such hardy animals that I rarely need to call for veterinary assistance. I’m glad it all had a happy ending!

It’s a bonus that so far all of the crias have been different colours, which is great for my selection of Coco Alpacas yarns.  The natural colours of their fleeces are so deep and rich that we don’t need to dye the wool- it would be impossible to improve on what nature has provided.

Alpacas are invariably good mums and produce amazing milk which is so nourishing that their young grow very quickly and are running and gambolling within a couple of days.  It’s beneficial if you have a few babies born at the same time, because they play with each other and get stronger by the day.

As well as playing midwife at the three births, I managed to squeeze in an appearance at the Three Counties Show at Malvern, where I had a stand for my Coco Alpacas yarn and knitwear.

Saturday was the showing day for the alpacas and Sunday was a day when the public could buy products and see the animals close up. As usual, people showed a great interest and asked lots of questions.

And then on to shearing day, June 25th, and I ended up with lots of poor shivering alpacas when the weather turned cold! It was a bit of a shock for them to lose their lovely warm fleeces during a chilly spell, but it had to be done- they were getting too hot when we had the warmer weather earlier on in the month.

I now have a lot of sumptuous fleeces to sort out so that I can get them sent off to the mill for this year’s batch of yarn.

If you haven’t yet visited us in the High Street at Church Stretton (opposite the Square) do pop in and make our acquaintance over the summer. 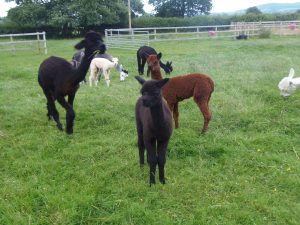